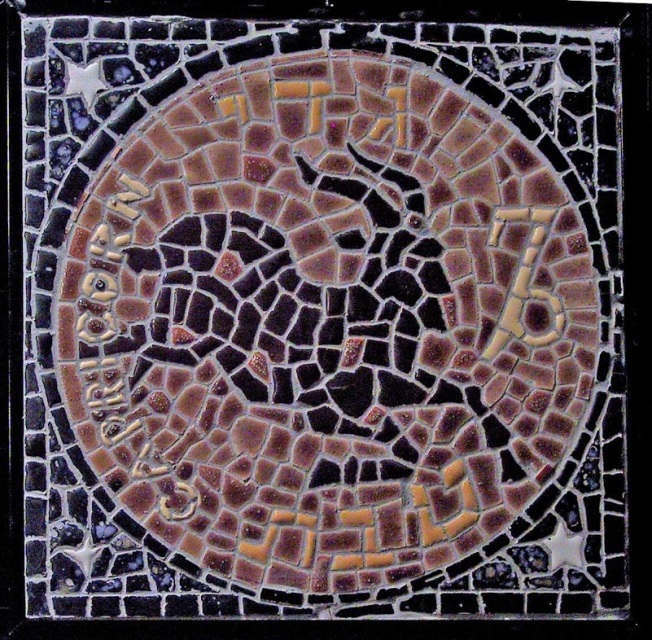 One explanation of the fishtail with which the goat is often represented is found in the Greek myth of Pan, who, to avoid the monster Typhon, jumped into the water just as he was changing into animal shape. The half above water assumed the shape of a goat while the lower half, the tail, assumed the shape of a fish.

Add to Cart
​apricorn
December 22-January 19
One explanation of the fishtail with which the goat is often represented is found in the Greek myth of Pan, who, to avoid the monster Typhon, jumped into the water just as he was changing into animal shape. The half above water assumed the shape of a goat while the lower half, the tail, assumed the shape of a fish.
Mosaics decoration was first used many centuries ago. People from all over the world loved and decorated their floors, walls and places of worship with the small, wonderful, colored cut pieces. It was the Greeks, in the fourth century BC, who raised the pebble technique to an art form, with precise geometric patterns and detailed scenes of people and animals. By 200 BC, specially manufactured pieces ("tesserae") were being used to give extra detail and range of color to the work. Using small tesserae, meant that mosaics could imitate paintings. Astrology began as an aspect of Mesopotamian religion. The planets manifested the great gods in the same way that everything else in the universe did. Likewise, the gods signaled their plans for humanity via the planets. Looking into the sky for guidance was especially popular in the Assyrian Empire. When mathematical astronomy developed and it was possible to predict the planets' motions against the backdrop of the stars, this, too, was used to divine the gods' will. "Scientific" astrology was the result. But the religious assumptions were still present. The motion of a planet might signal a god's intentions, but the appropriate ritual might still be used to change his mind. What we call natural laws, a Mesopotamian might call divine habits. Astrology, in both "scientific" and religious aspects, spread. The idea that the planets were divine was well known in Bronze Age and Iron Age Syria and Palestine. Mesopotamian systems of interpretation were known as well. The Greeks, too, learned of Mesopotamian astrology and, especially in the centuries after Alexander, modified it heavily. A new and even more elaborate system of interpretation, based on Hellenistic science, was developed. Hellenistic astrology, in turn, spread throughout the known world. Other societies adopted it and reinterpreted it to fit their own needs and beliefs. The basic principles and the rules of interpretation became common knowledge through the Hellenized world. Ancient Jews were part of the larger society, although with some distinctive customs, notably the worship of a single god, and a disdain for the use of religious images. During the Hellenistic period, Jews adopted the practice of astrology enthusiastically, but they gave the principles of astrology their own Judaic interpretation. Thus, the planets were still imagined as personal beings, who might answer requests. But the beings were seen as subordinates of the single God, angels of God, not independent deities. The power of astrology came from God, and was administered by the angels. In the same way, Jews adopted the use of astrological art for religious symbolism. But, as with astrological practice, the art was given a distinctive Judaic interpretation. Thus, it was not possible to portray God directly in a synagogue. But it was possible to portray Him indirectly, by portraying His satraps, the planets. In the examples that survive, Sol Invictus in the center of the zodiac represents the whole planetary system. The seasons may indeed be a reference to the Jewish calendar. At the same time, they may have reminded worshippers that ""I will never curse the ground again because of man . . . "neither will I ever again destroy the every living creature . . ". . While the earth remains, seedtime and harvest, cold and "heat, and summer and winter, shall not cease (Genesis 2: "21-22). The entire composition not only praised God's power, but also reminded worshippers of God's love and care for Israel. It is no accident that the zodiac is coupled, at Beth Alpha, with the sacrifice of Isaac or, at Naaran, with Daniel in the lion's den. These two panels reminded viewers of how God rescued Isaac and Daniel when they needed Him. Moreover, all the zodiacs are found in connection with panels of symbols from Jewish cult. Just as God is faithful to care for the universe, including the Jews, so the pious Jew will be faithful to worship the Almighty God, who so often, in the Bible, declares His love for Israel. The virtues of this theory are that it explains the zodiac mosaics by taking astrology and its role in Jewish society seriously. We do not require Jews to be either totally isolated from the rest of the human race, or apostates from Jewish tradition. Jews used the same horoscopes, spells, and symbols as their neighbors, but they used them in a Judaic way for Judaic purposes. Like their modern descendants, they were both part of the larger surrounding society, and at the same time faithful to the Israelite tradition.