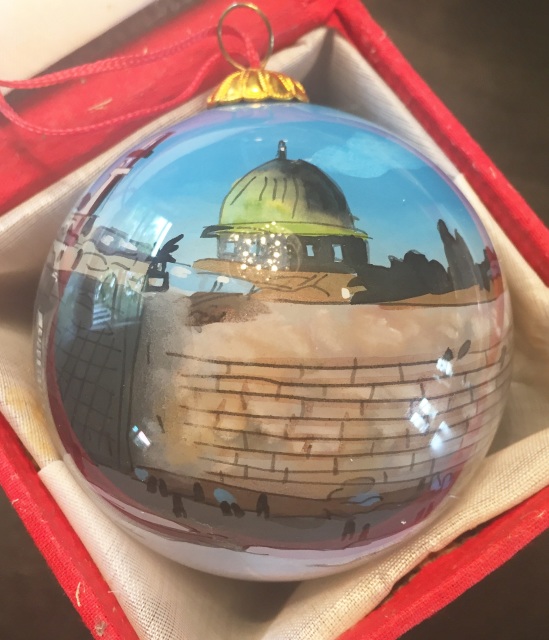 The design has been painted from the inside of the glass by skilled artisans. This ancient technique is achieved by special curved brushes that are inserted from the top hole. This design depicts the Temple mount which is a holy site to Muslims, Jews and Christians alike.

Jerusalem is a city rich in history, tradition and culture references to the city of Jerusalem appear throughout time. Through the ages it has been called by many names: Salem, Mount Moriah, Adonai Urah, Jebus, Jerusalem, Zion, the City of David, and Ariel (Lion of God). God has declared that this is the place He will establish His Name and will dwell there forever (1 Kings 9).

Add to Cart
The history of Jerusalem begins when Abraham meets, king of Salem - around 2110 BCE (Genesis 14) after he had captured Abraham's nephew, Lot. Several years later, following a command from God, Abraham took Isaac, his only son, to Mount Moriah to offer him as a sacrifice to God. Abraham called that place of sacrifice, "The Place Where God Will Be Seen" since God provided a sacrifice in place of Isaac. Among the early records referring to Jerusalem are Egyptian tablets dating from about 1400 BCE that name the city Urusa. Around 1405 BCE, "The sons of Judah fought against Jerusalem and captured it" (Judges 1:8). David conquered Jerusalem by defeating the Jebusites in 1052 BCE and built Jerusalem into a great city. David wanted to build a house for God, but because of the blood on David's hands, God did not allow him to build the house David greatly expanded the Kingdom of Israel and made Jerusalem its capital. After David's death, Solomon, his son and successor, built a city wall and many buildings on a scale of magnificence previously unknown in Israel. When it was completed, the Glory of God filled the Temple. However, because Solomon went after other gods due to the influence of his pagan wives, Solomon’s Temple was destroyed and the Jews exiled by the Babylonians in the year 586 BCE. In 539 BCE, the Persians, who allowed the Jews to return to Jerusalem the following year, conquered Babylonia. The construction of a new temple was then undertaken on the ruins of the old. Alexander the Great in 333 BCE captured Jerusalem, and after his death it came under the rule of the Syrian ruler Antiochus IV who attempted to wipe out the Jewish religion by destroying a large part of Jerusalem. This caused a Jewish revolt under the leadership of Judas Maccabeus, a member of a priestly ruling family, the Hasmonaeans He liberated Jerusalem from the Syrians in 165 BCE and later extended Hasmonaean rule over a large part of Judea. Jerusalem became the destination of annual Jewish pilgrimage from the outlying area, since certain religious obligations could only be fulfilled in the temple. All Jewish sacred and secular law and power came to be concentrated in the city. In 37 BCE the Roman governor Herod became king of Judea. Herod rebuilt the temple, and enhanced other elements of the city. The retaining wall built by Herod for the Temple Mount stands today as the Western Wall. In 70 CE, Titus, son of the Roman emperor Vespasian, captured the city, destroyed the Temple, except for the Western Wall. The city suffered almost complete destruction during the Jewish rebellion (132-135) led by Simon Bar Kokhba, following which the Jews were banished from the city. The Roman emperor Hadrian, rebuilt the city as a pagan city, and changed its name to Aelia Capitolina. Under Roman rule, the city became a destination for Christian pilgrimage, and the Church of the Holy Sepulchre was built during the reign of Constantine the Great (303-337). Roman support for churches and religious figures gave the city an increasingly Christian aspect. In 638, the city came under Muslim control following conquest by Caliph Umar I. The Dome of the Rock and the Al Aqsa Mosque were soon constructed on the Temple Mount, with the Dome of the Rock standing on the site of the First and Second Temples. The Seljuks, a Turkish dynasty, ruled Jerusalem harshly in the 11th century and continued to expand, especially toward Europe. In response to this expansion and Turkish control of places sacred to Christianity, Pope Urban II called the first of the Crusades, asking Christians to travel to the Middle East and fight to reclaim the Holy Land, especially Jerusalem. Jerusalem fell to the Crusaders under Godfrey of Bouillon in 1099. The Crusaders slaughtered many of the Muslim and Jewish residents and ruled with great cruelty until Salahadin captured the city again for the Muslims in 1187. In 1517 the Ottomans, who ruled it until the 20th century, took Jerusalem. As the population grew, there was increased pressure on the housing capacity of the Old City. Jews began to build neighborhoods outside the Old City's walls, and nearby Arab villages expanded.